Worshipful Company of Gunmakers – Service of Thanksgiving and Nomination Dinner 2018

Outgoing Master, Jonathan Young, invest Diana Berry with the jewel of office, as the new Master of the Gunmakers' Company Photograph courtesy of Antoinette Eugster (amephoto@btinternet.com)

The Company’s annual Service of  Thanksgiving and Nomination Dinner took place Wednesday 7 November. The service was held at St Martin’s within Ludgate , courtesy of the Rt Rev’d Dr Stephen Platten, and was conducted by our Honorary Chaplain the Col the Rev David Cooper. At a time when remember those members of the Livery who have passed, the Master Elect, Mrs Diana Berry also marked the 100th Anniversary of the Armistice with Dawn on the Somme, a poem written in 1918 by Robert Nicholls:

Last night rain fell over the scarred plateau
And now from the dark horizon, dazzling, flies
Arrow on fire-plumed arrow to the skies
Shot from the bright arc of Apollo’s bow;
And from the wild and writhen waste below,
From flashing pools and mounds lit one by one,
O is it mist or are these companies
Of morning heroes who arise, arise
With thrusting arms, with limbs and hair aglow
Toward the risen god, upon whose brow
Burns the gold laurel of all victories,
Hero and hero’s god, th’ invincible Sun?

Following on, dinner at the Stationers’ Hall was attended by over 200 Liveryman and guests. Outgoing Master Mr Jonathan Young, presided over initial proceedings and spoke of the Proof House and Company’s achievements during his year. 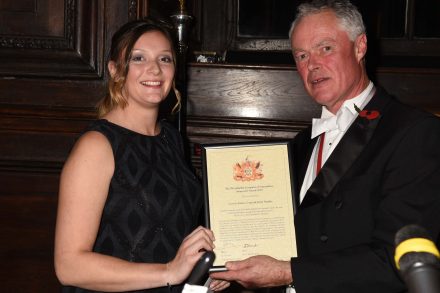 With affiliations an important element of this, he presented the Gunmakers Armourers Award for 2018 to Lance Corporal Jenny Stanley of the Defence School of Electronic and Mechanical Engineering. 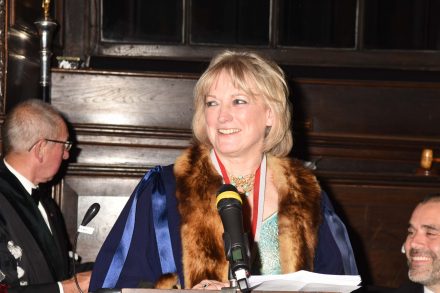 The installation of the new Master, then saw Mrs Diana Berry take the Chair as the first female Master of the Company. She made reference to her father Keith Neal, who had thrice been Master, and set out her vision and priorities for the ensuing year, including charity, principally knife crime, youth and women in the Livery. 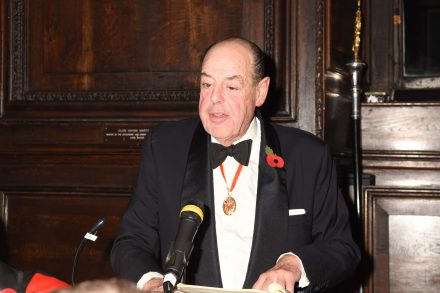 Photographs from the evening, were taken by Antoinette Eugster and may be purchased by contacting Antoinette at amephoto@btinternet.com .